Someday in heaven I will be honored to meet Jeanne d’Arc. These are my personal experiences, though separated by almost 600 years, with events in her life.

Jeanne d’Arc, “la Pucelle” or the “Maid of Orleans” is a true heroine and warrior for France. She, a saint, is like Esther of the Bible. Esther also knew, as Mordecai prophesied, that she was “born for such a time as this.” (Esther 4:14) These are the words of La Pucelle: “I am not afraid… I was born to do this.”  Esther might have been executed, but was not.  Jeanne, though, did die a martyr’s death.

Having grown up in a Catholic Church, I was familiar with her noble story. When going to art school in NYC, I was fascinated by a painting of Jeanne d’Arc in the Metropolitan Museum of Art. It was my favorite painting in the whole entire museum. I would go to it and just stare. In the painting, Jeanne stood in the woods by her home. If you stared at it long enough, two bright beings appeared in the canvas. It was absolutely amazing!

In 1999, while doing a camp for the Children of Chernobyl, we took the Belorusian children to see Domrémy-la-Pucelle, the town where Jeanne was born. In that home, I very definitely perceived a spirit of prophecy. In the spirit, I knew that the maiden really did have the visions that she claimed to have had.

I also sensed a spirit of prophecy in that area of France. Our cook at the camp had dreams and it spoke of the future. Unfortunately, she was not using it for the godliness, but I encouraged her towards it.

And this is why I wrote this article. This year in 2017, I had the opportunity to visit Rouen, the town in which she was martyred, burnt alive at a stake. I prayed, requesting repentance for the killing of a Godly saint.

As I returned from this trip, my pastor told me that she had had a vision some years before, of flags in the kingdom heaven. St. Jeanne d’Arc was among them. She has a flag flown high in heaven! 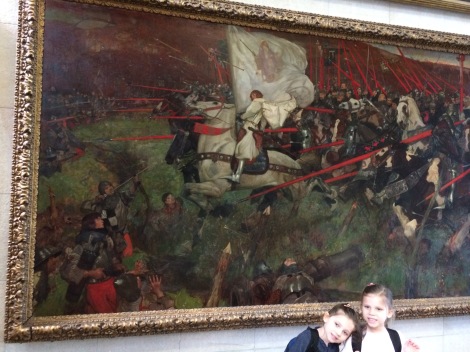 My two granddaughters at the Musee D’Orsay in Paris (2017)

Today, France would appear to be an atheist country, especially in the cities. Almost eighteen years ago, we met a little girl swimming in the ocean of southern France. My daughter sneezed, and I said something like a bless-you in French. The little girl declared that she does NOT believe in God. She was only about seven. That night, I went home and prayed and cried for the children of France. How could she NOT believe in God? That must have been taught to her by parents who had been hardened. Yet I believe my anguished prayers will be answered.

God had told me to do the camp in France for the Children of Chernobyl, a three-week long experience in the mountains.  I did not know why but I obeyed.  Local newspapers wrote about this. One even wrote that I had a vision to do it in France. I was shocked that they actually recorded it in their newspaper!

This was in the late 90s.   One day when I awoke, I had seen a map in my spirit. I knew it was in France, relatively near to the German border. My friend and I later went to find this camp. After we did much spiritual warfare in various places where the LORD directed, we walked in to a tourist place and there I saw the map that I had seen in my vision! I knew this was to be the actual place of the camp, as God put it, “Camp Holiness.” It was marked by the perfect number 7!

No, God has not abandoned France. The French people were oh so amiable to the Children of Chernobyl. The owner of the camp did so much for them, offering to pay their passage on a boat on the lake and taking them out on a rowboat.

Children of Chernobyl with my daughter on a rowboat in Gerardmer in 1999.

I pray for the French, that they will find Christ and enter into true liberty of the spirit, true fraternity of the brethren, and true equality, as we know that God so loved us that He gave His only begotten Son Jesus Christ.

“Mighty in the earth is his seed,

The generation of the upright is blessed.”