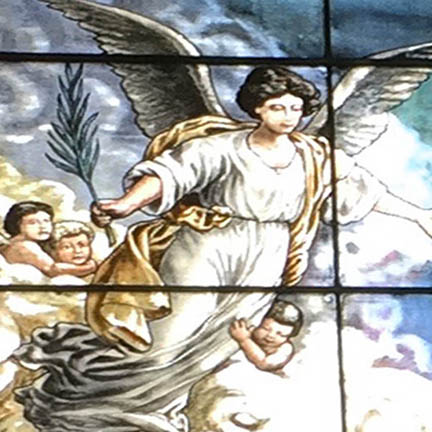 If you read the article “12 Biblical Points About Talking with Angels” by Charity Virkler Kayembe, it would be so very convincing.  She has a lot of Scripture references, though she doesn’t often site them there.  However,  if you take the time, you can find a lot of flaws in her arguments.

I do this because I want to protect the church from deception.  As always, if you feel a need to correct me on an issue, I’m not perfect, but I do need Scripture and verse!

I also dealt with the forward of her article in “All Things are Pure??”  because Titus 1:15 is out of context.    Also, see part one of Angels Everyday?

Every time in Scripture, the True God initiates an angelic encounter with whom He wills.   From the two angels He sent to destroy Sodom to Miriam (Mary) to St. John, it was at His will.

The co-author of Everyday Angels writes: “… how can angels do that when we are afraid to interact with them?”

But Miriam (Mary) and the shepherds at the birth of Christ were afraid by seeing angels!

Luke 2:10  (NKJV)  Then the angel said to them, “Do not be afraid, for behold, I bring you good tidings of great joy which will be to all people.”

So I will attempt to show that there is NO “strong biblical basis” for believers to be “engaging the angelic realm.”

God initiates an angelic encounter.  His will.  This is my main point.  It is “Thy will be done” not “My will be done.”  Over and over, this author emphasizes wrongly that we can initiate conversations with angels!  I fear that these angels are demons!  Eventually, if one continues, they will lead one into deception.

2 Corinthians 11:14 (NKJV) “And no wonder! For Satan himself transforms himself into an angel of light.”

Her Points About “Talking with Angels”

As a response to the prayer of Elisha, God initiates an angelic encounter. This is at the will of God, but God initiated it!  You can’t “practice” seeing angels.

2 Kings 6:17 (NKJV)  17 And Elisha prayed, and said, “Lord, I pray, open his eyes that he may see.” Then the Lord opened the eyes of the young man, and he saw. And behold, the mountain was full of horses and chariots of fire all around Elisha.

She writes: “It’s remarkable that nowhere in the Bible does Father ever specifically warn His precious children of the “perilous risks” of angelic interaction.”

Colossians 2:18 (NKJV) Let no one cheat you of your reward, taking delight in false humility and worship of angels, intruding into those things which he has not seen, vainly puffed up by his fleshly mind,

In Greek, the word “thréskeia” is used for “worship” but this is the only time it is translated thus in the New Testament. The Greek word means “religion”.  This was a religion of fallen angels!  It could NOT be that they were good angels of God because a good angel would say NOT to worship him.  This religion of fallen angels, or demons, would come under the spirit of Babylon, the great whore of Revelation that causes people to worship false gods.

As Christians, we should worship to the true God: YHWH,  Elohim, Jesus Christ.   But we  can be sadly deceived.   Why else would it say to believers,

How about two whole chapters of Hebrews? (1&2)

(This will be addressed later  on POINT 9.)

She writes:  “While some Christians are afraid of being deceived and accidentally worshiping a fallen angel, there is NO record in Scripture anywhere of any believer actually doing that. Therefore, biblically speaking that fear is not justified. ”

Now, let’s just think about this.  What is a “fallen angel”?   You might say that a “fallen angel”, including satan himself, are demons or devils.   So, yes, they do get people, even believers, to worship them!  I was one of them.  I didn’t do it willingly but I did.  Thank God, I’m delivered!  I’ll repeat it:

What are we worshipping when we worship a false god?  It is a demon!

She writes: “These verses are a wonderful promise from God Himself showing us that He will not allow His children to be deceived.”

And she knows the Bible?  How can you miss so many “Do not be deceived” in the New Testament, speaking to believers?

1 Corinthians 6:9 (NKJV) Do you not know that the unrighteous will not inherit the kingdom of God? Do not be deceived. Neither fornicators, nor idolaters, nor adulterers, nor homosexuals, nor sodomites,

Galatians 6:7 (NKJV)  Do not be deceived, God is not mocked; for whatever a man sows, that he will also reap.

Matthew 24:24  (NKJV)  For false christs and false prophets will rise and show great signs and wonders to deceive, if possible, even the elect.

A quote from Pulpit Commentary on this passage:

“The translation ought to run, as in the Revised Version, so as to lead astray, if possible even the elect, signifying the difficulty, not the impossibility, of drawing them away from the truth. “The elect” are Christians, true followers of Jesus, and members of his Church. These may fall from the faith, for they are not yet finally safe, and on that chance Satan builds; but as long as they rest on Christ, looking to him for guidance and protection, trying the spirits by the Word of God and by the truths which they have learned in creed and worship, they stand firm against the strongest temptations.”

Even if the above learned commentary is not quite right, depending upon the possibility or impossibility of the elect being deceived, I would be wary of being led astray!  People are deceived all the time!   Christians are deceived when we fall into sin!

“False christs and false prophets will rise and show great signs and wonders.”   Where, oh where is this happening?  I do believe in miracles and have been miraculously healed, but are you in the Presence of God OR just some trickster that knows the ropes and will fake a “miracle”?

She writes: Obviously since we are teaching the 5 Scriptural Safeguards for Spirit Realm Navigation which includes, most importantly, being saved by Jesus and entering the spirit realm by His cleansing blood, this Gnostic teaching does not apply to us.

In the writings of the New Testament, these early Christians were warned against Gnosticism  corrupting their faith.  How can she say that “this Gnostic teaching does not apply to us.”?  Because we are so smart? Satan uses the same ploys over and over again.

1:4-14 Many Jews had a superstitious or idolatrous respect for angels, because they had received the law and other tidings of the Divine will by their ministry. They looked upon them as mediators between God and men, and some went so far as to pay them a kind of religious homage or worship. Thus it was necessary that the apostle should insist, not only on Christ’s being the Creator of all things, and therefore of angels themselves, but as being the risen and exalted Messiah in human nature, to whom angels, authorities, and powers are made subject….The most exalted angels are but ministering spirits, mere servants of Christ, to execute his commands.

I prefer to talk to the LORD Himself rather than angels!  I cry out for the church to be saved from this deception!

If they are all out of Bethel, with which this is associated, they probably all believe the same way.

She writes: “Jesus did nothing on His own initiative;”

TRUE.  But would she have us initiate conversations with angels?   Then you might just receive dark “angels”!

These are the two references she cites in this point.  These are not your everyday occurrences!

Luke 22:43:  Jesus Christ, in the Garden of Gethsemane, was about to be crucified!   An angel came and ministered to him.   But that is not the norm.  It’s not an everyday angel.

Christ prayed for us!  He bled and died for us!  This happened once for all time.  It is not an everyday experience!

Hebrews 9:28  (NKJV) “so Christ was offered once to bear the sins of many. To those who eagerly wait for Him He will appear a second time, apart from sin, for salvation.”