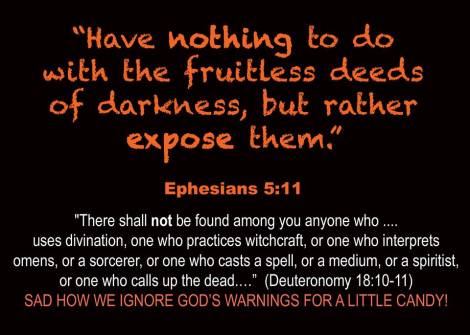 “Have nothing to do with the fruitless deeds of darkness, but rather expose them.” Ephesians 5:11

How does one expose them?  By saying it is wrong.

Halloween has become one of the biggest celebrations in America.   Can it not be that syncretism with pagan holidays, in part, has lead to this lack of morality in our country?   That and the fascination with witches and warlocks.

The rowdies of Halloween fame are not pure.  Witches and warlocks are me-centered. They speak, “What’s in it for me?” or  “How can I make you do what you don’t want to do?”  And it comes forth as a spell.  They are carnal in nature.  They pray “My will be done” NOT “Thy (the Lord’s) will be done.”  There won’t be any witches or warlocks in the Kingdom of God, unless they repent.

But the LORD encourages us:

“Train up a child in the way he should go; even when he is old he will not depart from it.”  Proverbs 22:6

We need to tell children not to go along with the politically-correct way of doing things. They need to learn now.  Children need to be LIGHT and conduct themselves in righteous ways.

“Religion that is pure and undefiled before God, the Father, is this: … to keep oneself unstained from the world.” James 1:27

THE MEANING OF WORDS

Where does “Trick or Treat” come from? Put it like this: ”If you don’t want an evil trick played on you, then give me my candy.” This is wrong. You might say it’s just an expression. The words say it. Words have meanings.  WORDS HAVE MEANINGS!

I once was a Buddhist, many years ago. The chants, they have meanings, too! Many call on the names of a false god in their esoteric positions and wonder why they have problems! Words have meanings.

A music minister, in another part-time position, told me that it would be all right to sing praise to Venus!  She explained that the language was Latin and people didn’t understand the words.  I did!  Words have meanings.   I would not sing and left the choral society.

“For at that time I will change the speech of the peoples to a pure speech, that all of them may call upon the name of the LORD and serve Him with one accord.”  Zephaniah 3:9

WHAT CAN BE DONE?

If you want to do something for the LORD, not just on Halloween but any day, GO and pray for someone.   Do for others.   Give out a tract and something worthwhile.   That is the opposite spirit.   Wouldn’t it be shocking to have “little angels” at the door and say, “Jesus loves you” and pray for them?  Don’t threaten them with the expression, “Trick or Treat,” but say something that is a blessing!    Tell them, “Hallelujah!  The LORD reigns!”

The Fall Fest or Hallelujah Nights offer games and activities.   Many churches do evangelism this night.   Some of us need to be praying.  Do what the LORD tells you to do, in which case, that would NOT go against Biblical standards.

“Have nothing to do with the fruitless deeds of darkness, but rather expose them.”  Ephesians 5:11

One response to “NOTHING TO DO”