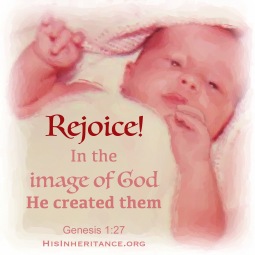 “He gives the barren woman a home,

making her the joyous mother of children.

Abraham’s wife Sarai was barren. (Gen 11:30) But Abraham believed God. Then in God’s timing, Isaac, the child of promise was born in their old age.

Isaac’s wife Rebekah was barren. (Gen 25:21) But Isaac pleaded with the Lord and she gave birth to twins – Esau and Jacob!

Jacob’s wife Rachel was barren. (Gen 29:31) But God listened to her prayer, after many other children had been fathered by Jacob through Leah and concubines. Then Rachel “conceived and bore a son, and said, ‘God has taken away my reproach’ So she called his name Joseph.” (Gen 30:22-24) Joseph became the instrument to save Israel from dying off in severe famine.

Isn’t this amazing? All of the patriarchs – Abraham, Isaac, and Jacob – had barren wives! Yet all eventually conceived by the grace of God and their children were included strategically in God’s plan of salvation for all mankind! Wow! Wouldn’t you wait years for such a child?

But the story of God’s glory continues beyond the patriarchs. The Scripture is true for all those who believe: “They that wait upon the Lord, shall renew their strength…” by the grace of God!

Hannah was barren. “The Lord had closed her womb” until after Hannah poured “out her soul before the Lord.” and she bore a son’ and she called his name Samuel, for she said, ‘I have asked for him from the Lord.’” (1 Sam 1:5-20) Samuel became a great prophet.

Manoah’s unnamed wife was barren. (Judges 13:2) But after a word from the Lord, “the woman bore a son and called his name Samson. And the young man grew, and the Lord blessed him.” (Judges 13:24) Samson became a great deliverer!

“Elizabeth was barren, and … advanced in years. (Luke 1:7) Elizabeth “in her old age” “conceived a son”. She had been “called barren” but look what the Lord has done! (Luke 1:36) She gave birth to John the Baptist! Of him, the Lord Jesus Christ spoke:

“Truly, I say to you, among those born of women there has arisen no one greater than John the Baptist. Yet the one who is least in the kingdom of heaven is greater than he.” (Matthew 11:11) [What a “quantum leap” here in – going from the greatest to the least being greater!]

So just why did the Lord use barren women in His plan for salvation? The outcasts, the rejected, those thought to have committed some heinous sin to be cursed with a barren womb? There’s probably more than one good answer to these questions. I’ll let you ponder it.

But I imagine these long-awaited children brought great joy to their parents! They certainly brought great glory to God! And since we New Covenant saints, even the least among us, are “greater than John the Baptist”, because of the Holy Spirit within us, then we too can be used mightily for God’s glory. Our empty, barren, unfruitful lives suddenly by the will of God, according to His divine purpose and timing, will blossom and we will bear the fruit for which we are longing and for which we are pleading. YHWH still is the God of the Breakthrough, the God who opens wombs, the God who moves mountains, and the God who with one word can create a new life in Jesus Christ! May God be glorified in His church! “Sing, o barren!” ( Isaiah 54:1; Gal 4:27)