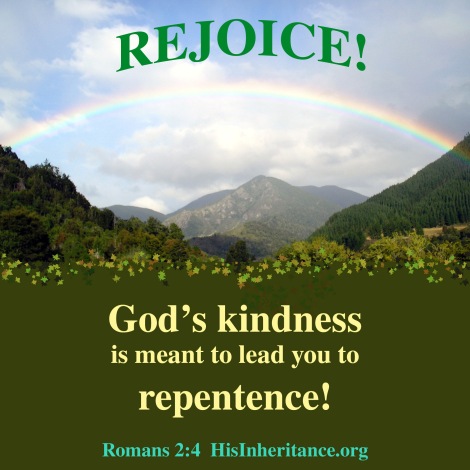 Someone once questioned: “How can you make up for wrongs committed by doing what you should be doing anyway?”  Good question.  Think about this.

No matter how hard I tried I was never perfect.  Therefore, I was always adding to my “negative karma”.  Maybe the good outweighed the bad but there was always that imperfection.  The “good” could never erase the “bad”!  What was I to do?  How can anyone get rid of his heavy load of karma?

I gave all my “karma” to Jesus Christ, the Savior! (Yeshua Ha’Mashiach, his Hebrew name.)

There is ONE way.  Jesus Christ said:

He didn’t say “a way”.  He claimed to be the only Way.  So much for the “many paths” theory.  Jesus proclaimed, “He who does not believe is condemned already.”  John 3:18

Everyone has sinned (except for Christ who is “God with us”, born of a virgin.)  That impurity has separated us from a holy and perfect God.

For God so loved the world that He gave His only begotten Son, that whoever believes in Him should not perish but have everlasting life.  John 3:16 (NKJV)

God, in His graciousness, gave us the answer to our sin problem!  (If you’ve ever lied, you have a sin problem!)  Jesus Christ, who remained sinless, paid our debt of sin, our “negative karma”.   He paid it when Christ died on Calvary’s cross.

Death is the penalty for sin.  Jesus Christ never sinned.  He died instead of us to pay our penalty for sin.  Christ’s act of selfless love so pleased the Father that there is enough grace for all our sins to be covered.  But that payment needs to be applied to your account.

But how can you apply God’s grace (unmerited favor) to your account?

By faith.  Believe.  Take God at His Word.   Salvation is by grace through faith.    It is not by works.  It is not anything you can do.  (Ephesians 2:9-10)  It is simply putting your trust in Jesus Christ.

Faith in Him has always been God’s requirement.  Even Abraham was saved by grace through faith”

And he [Abraham] believed in the Lord, and He accounted it to him for righteousness. Genesis 15:6 (NKJV) (Also, Romans 4:3b)

Every other religion requires “good works” and then maybe you’ll get to “nirvana”, “heaven”, or whatever.  God’s Way is better than our man-made religions.   Has Buddha or Mohammed ever claimed to be God!  They were men!  Only Jesus Christ has been raised from the dead by His own power!

Only Jesus Christ, Yeshua HaMashiach, offers eternal life with Him, and through Him, by faith through grace.  (Jesus Christ name in Hebrew is Yeshua Ha’Mashiach.)

4 Now to him who works, the wages are not counted as grace but as debt. 5 But to him who does not work but believes on Him who justifies the ungodly, his faith is accounted for righteousness, 6 just as David also describes the blessedness of the man to whom God imputes righteousness apart from works:  7 “Blessed are those whose lawless deeds are forgiven, And whose sins are covered;  8 Blessed is the man to whom the Lord shall not impute sin.” Romans 4:4-8 (NKJV) (See Psalm 32:1-2)

God, in His infinite wisdom and love, provided the Way to Himself, for all mankind.  You don’t have to be among the privileged few who can pursue a life “on the mountaintop” in meditation.  You don’t have to “practice Buddhist austerities”.  These disciplines may get you in touch with your “inner self” but they CANNOT get you access to the Father Creator.  These practices may get you in touch with spiritual powers (or fallen angels) but they are NOT the Holy Spirit of God!

The so-called “spiritual” prowess attained through Eastern disciplines develops the “soulish” power of man – “mind over matter”.  This is witchcraft.  God considers “spiritists”, contacting the dead, and conjuring spells or “angels” an abomination, a big NO-NO!  (Deuteronomy 18:10-11)

Do you really desire God’s will to be done in your life?  Are you willing to reject every teaching that is not the truth, even if it means the path you are on right now?  What good will it profit you if you do it your way now but lose eternal life?  Will you ask God Almighty, the creator of all, to lead you to the TRUTH?  He will show you that Jesus is “the Way, the Truth, and the Life!”

But as many as received Him, to them He gave the right to become children of God, to those who believe in His name.   John 1:12  (NKJV)

That is the Father-God’s will!

Believe and receive.  Believe in and on Jesus Christ and receive the gift of God – eternal life!   Receive His forgiveness.  Receive His love!  Know the TRUTH and be set free!  Get off of that vicious, vain cycle of “karma”.  Let Jesus Christ move you from the kingdom of darkness into His glorious light!

This was one of the first tracts I composed early in the eighties.  It’s been re-editted and is now online!